The current Amersham Police Station was opened in 1964.  This is the lower building in the below picture.  The taller building was added in the 2000s. 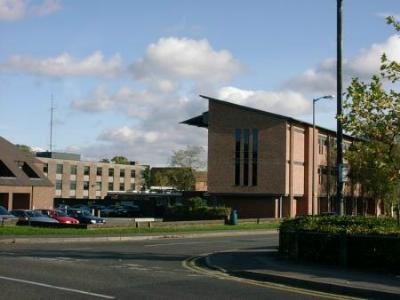 The police station in use prior to the 1960s built station was very different.

Located in Amersham Old Town roughly where the entrance to Tesco is now, it was basically a wooden hut, extended in 1960 with the addition of another hut.

I am grateful to Tony Dale for the below photos and descriptions and to Malcolm Flack for arranging for the details to be made available to this sight.

In the above picture you can see the added wooden hut.  This was the old Wendover police station moved to Amersham in about 1960 when Wendover had a new police station.  The new hut had three offices in it, for the Inspector, Sergeant and C.I.D.  The original or main hut consisted of a small public area which kept them out of the rain while being attended to at a hatch to the main office.  The main office was manned by a P.C. at the switchboard who also dealt with the public at the hatch.  Also in the main office was an old fashioned coke boiler for heat, there was no other heating in the station.

Next to the main office was a cramped section where the Sergeant had a table in one half, the other half was the mess room.  The mess room comprised an enamel table and kettle, along with an old Victorian style enamel basin on a stand.  Water was provided by an old enamel jug of the same era!    Under the table was a bucket for any slops.  When this was full it was taken around the back and emptied on the pile of coke to be burned.  The jug of water was filled from a tap in the outside toilet of the nearby police house.  One had to be careful as the tap was very close to the toilet pan!

The rear section of the hut was divided into two.  One section was for the Inspector and the other for the found property store.

If anyone has any other details of police stations / houses in Amersham, please let us know.  Next to the old police station mentioned above were police houses, knocked down when Tesco was built.  There were also some police accommodation on Woodside Road and there must have been an older police station / house in Amersham Old Town.

Share your views on Amersham, or post a message for others to read on the Amersham forum